It seems to come up in online discussion fairly frequently, about cigar box date codes, and the various markings found on top of, and underneath, the cigar boxes themselves.  With such a commodity like Cuban cigars, and how frequent and widespread their counterfeiting can be, people are rightly cautious sometimes.  Even though newer anti-counterfeiting measures are being put in place (such as packaging changes, self-destruct-if-removed warranty seals, bar codes with an online checking tool, and newer bands even with holograms on them), sometimes the reputation-thieves are very much right there on their A-game.

One of the things is box codes.  These stamped in codes are applied to the bottom of a cigar box, and delineate the month and date that said box of cigars has been packaged (note that they could have been rolled previous to the month shown, and the date is only when the overall process was completed and they were boxed up), and also show the 3-letter code for the factory they were made in.  While deciphering the codes has gone the way of the dodo bird, the month-and-year code gives aficionados a reasonable measure as to the age and sometimes general quality of a given box of cigars.  The thought is that if you had a great box of MUL-factory-coded cigars from 2010, it’s not a guarantee, but it may help in your search for the same type/brand of cigars if you find an MUL-coded 2012 box.  Not a guarantee at all, but it can sometimes help.

A great Cuban cigar resource and more information about these date codes and factory stamps can be found at the Cuban Cigar Website here:

With these codes, as there’s various factories throughout Havana, and Cuba, producing these cigars, the date-code stamps themselves are never perfect.  It always seems to come up in conversation about people about how the date codes can look so different, for the same brand of cigar.  Well, given that millions upon millions of Montecristos are rolled every year, you could have multiple boxes of Monte No. 4’s, with many different factory codes, even from within the same month, and even the stamp formatting itself could vary… 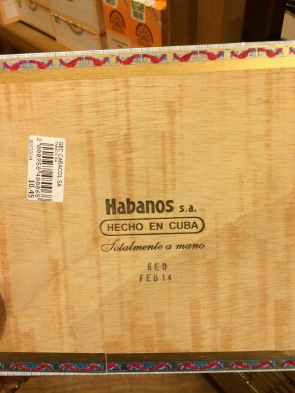 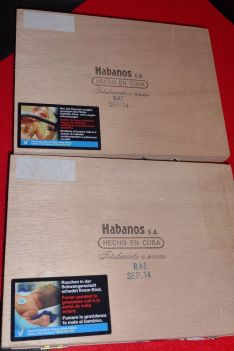 All of these date codes were photographed on my November 2014 trip to Havana, and all were known legit boxes from various LCDH shops and other cigar divans.  (The last picture added in there is courtesy of Frank, from boxes coming my way from Europe that he photographed the codes for me.)  Yes, there’s still a number of fakes you still need to watch out for in the actual shops themselves in Cuba, but these boxes were all authentic, even with all these different stylings for the date codes themselves.  But as you can see, the month and year portion is sometimes separated by a simple single-space, sometimes with a hyphen, sometimes with a colon, sometimes with an asterisk, and sometimes even a simple period.

People sometimes cry foul and declare as counterfeits/fakes that which they cannot trust.  With so many changes over the past years, and Habanos S.A. rarely giving any “official” details or media releases out, sometimes it’s hard to be 100% sure.  Once you find a good one, trust your vendor/source, and once you develop your palate to a particular cigar, that’s your best guarantee – it either smokes like a real one, or it doesn’t.  Yes, people need to take the overall constellation of facts into account – that the packaging is correct, the cigars themselves look and feel and smell correct, that the bands are correct, that the date stamps are correct, etc., etc.

But, as the above pictures show, no single thing can be a complete guarantee.  With so many Tabacuba factories changing so much in recent years, something as simple as a stamped-and-marked in factory code is hard for them to keep uniform.

People sometimes ask what a cigar mastercase is.  Simply, a big cardboard shipping case of a particular run of cigars.  The info on the sides give various particulars on the goodies inside.  The code on the boxes are generally all the same inside a single mastercase, but they are all always from one particular factory – so you could have a two-code mastercase when a factory did a box code change mid-way through a particular month perhaps.

I did, when I was down in Havana, have a picture of box 1-of-66 or so of the first production batch (Sep 2014, UME, I think it was) of the Cohiba Robustos Supremos LE (a cigar I reviewed here).  Unfortunately, I deleted that picture in the transfer of that digital data to my computer upon the return from that trip – and trust me, I’ve kicked myself about it since.

So, there’s a little bit about box codes and mastercases.  Hope it answers some questions.