For some of the previous posts on this trip to the Iberostar Grand Rose Hall in Montego Bay, Jamaica, please use the following hyperlinks:

And so, continuing on from my previous post about cigars from this trip…

6.  Trinidad Fundadores.  Dic 2009 “OUS”.  Now this one was a bit of an experience to be had!  Had a loosely-packed foot, dark ligero-loaded head upon cutting, and some soft spots throughout that became more pronounced as the cigar progressed, due in part to the format interacting with the conditions that day (29 C and 79% RH, 19 kph wind, and right poolside).  Heavy residual salty taste and feeling in my mouth and nose at the start of this cigar, from snorkelling with Erin in the Caribbean Sea earlier.

But a perfect draw on this cigar.  It had a wonky burn to start, but with a slightly firm ash (1-1/2″ groups).  Not much smoke off the foot “at idle”, but loads of smoke when drawn on.  Heavy tones of leather and dark tea, saddled onto toasted tobacco.  Hits of shortbread cookies and honeydew melon – that’s right, folks, honeydew melon in there too!  LOL.

It held up very well in the heat and the humidity overall – the wrapper had some slight unravelling near the end of the experience.  No harshness or sour tinges, right to the stubby end.  A solid 93; would have perhaps been slightly higher if not for the slight construction and burn issues.

An elegant and classy smoke to start that particular day for me.  And to lead me into an ass-kicking afternoon of drinking triple-tequila margaritas.  Had a dinner reservation that night for 8:30 pm, but instead, went up to the room at 6:15 to have a nap prior to, and instead slept right through until 6:30 am – aside from having Erin shove my ass over in bed at 11 pm after she spent the evening reading.  LOL. 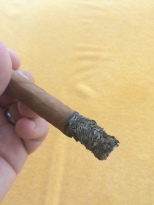 As for the cigar itself, it had flavours of cherry-red coffee beans, nougat, cooked red apples (a slight deviation from the atypical “RA flavours” of “stewed fruit”), and with strong molasses and wet leather tones.  Lots of relights.  Could have been much better if not for burn issues – 87 points.

Trinidad Robustos T.  Jun 2009 “OUS”.  Kinda uninspiring that day, but my palate was zapped from spicy and strong foods, coffee and drinks from that morning and the previous day.  Still pissed that these were discontinued so early into their release by Habanos S.A. though.

The resort itself had a nice little cigar lounge there, Hemingway’s.  While I didn’t actually bother to visit it for a smoking experience, I did know it was there and wanted to check it out; it appeared to almost always be staffed during normal hours, and had a pleasant-enough looking selection (which did mostly appear to be legitimate stock, rather than some of the fake cigars being peddled by some of the shops in the resort’s plaza area).  The staff seemed attentive too, but it was just too nice of weather outside and such a gorgeously-designed resort for me to sit inside and smoke. 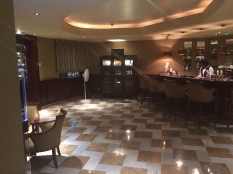 Perhaps on a future trip I’ll check it out more.