Ramon Allones – yup, love ’em.  This one here is another format that I smoked earlier this spring, and neglected to get a review done.

This particular stick (both, actually – you’ll see why shortly) is from a box-split that I did with two other Canadian buddies from FOH.  When these things came out, they were fairly potent little powerhouses, very bold and in your face.  I was hoping time did them well…

Construction/Appearance & Pre-Light:  Well, my first stick was wonderful.  Slight over-extension to the cap itself, but overall very nice.  But then…I dropped the fucker.  It hit the edge of the quartz countertop of our newly-and-almost-done downstairs bathroom, where I was taking a picture of it for better lighting, and cracked the wrapper right open.  Was not salvageable at all, and pissed me right off.  Then, unwrapped it right open, and kinda did a little autopsy of the tobaccos within.  Shoulda taken more pictures though, but it is what it is.

Anywho, after ruining my night, I gave another stick of this cigar a try the following evening, resulting in this review here.

Again, wonderful stick overall.  Slight compression of the foot (making it a bit one-sided / off), but no major issue there.  Gorgeous honey-brown colour to the wrapper, no veins, no cosmetic flaws to the silky thin and supple wrapper leaf.  The cap head had a slightly folded-over piece to it, but no issue there also.  The funny thing to notice is the slightly undersized RE bands used with this cigar – slightly too small for the ring gauge of the cigar, so you end up seeing bare paper, rather than a relatively-seamless continuation of the band from one end to the other.

After cutting the cigar and tasting at cold, I was quite happy.  Light white pepper tones, old leather, dry wood and grass, maybe a hint of black tea and honey.  This may be interesting.

Opening Impressions, then First, Second, and Final Thirds:  Well, I think it was interesting.  And yummy.

Honestly, I didn’t take many tasting notes, and it’s been a few months, so I’m hard pressed to remember all of the tasting particulars.  While I did some detailed pre-light notes on my iPhone, the actual smoking notes relatively went to pot once in the hot tub. 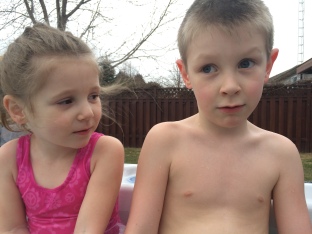 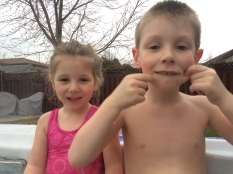 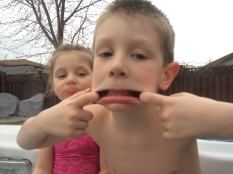 LOL.  I had the little monsters follow me out into the hot tub after supper.  It was all about making faces at Daddy, and hamming it up for the camera.  Hell, even with these pics only going back a few months in time, I’m noticing how amazingly quick they’re growing up on me, especially with all the time I’ve had to spend away from home over the past few years.

I did take a few extra cigar shots, and from those, I do recollect a few things.  Namely, the burn was quite good and I fairly well enjoyed it once going through the tapered foot.  Also, being fairly humid with the hot tub, it was easy enough for the fairly tight double-bands to eventually separate on their own.

Also, one interesting point I picked up on while smoking was a lightening of the tobacco.  Basically, at the cut head of the cigar, after smoking it for a bit and the tobacco becoming more and more moist (such a naughty word, LOL), the tobacco actually become lighter.  It simply became a lighter tan shade of the golden brown that it was before.  There was no staining to my lips or anything like that, or any other noted differences.  Just simply that small bits of the tobacco got lighter in colour. 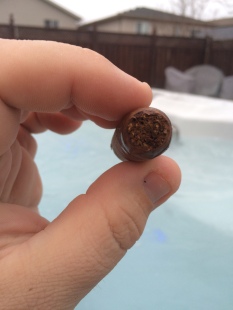 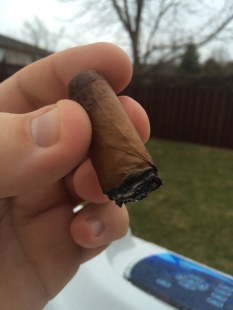 Finishing Comments / Overall Impression:  So, the details on this cigar are a bit wanting.  The kids really had me going during this hot tub time instead.  However, two main things I did note with this cigar review experience…

Firstly, I did specifically make a mental note as to how much smoother these Celestiales Finos have got.  When they were first out, they were spicy and strong little bombs, that were somewhat harsh and hard to smoke initially.  But, I did note that things have improved immensely.  Still fairly good legs to come, and a definite cedar aspect starting to come to the forefront more, but definitely improving.

Secondly…love my kiddies and always get a chuckle out of them (when they’re not making me lose my hair).  Time spent with them can’t be frequent enough, and has more reward to my soul than any cigar smoked.

Smoking Conditions:  In the hot tub, 8 degrees Celsius and 68 % RH outside, with an 18 kph breeze.