For some of the previous posts on this trip to the Iberostar Grand Rose Hall in Montego Bay, Jamaica, please use the following hyperlinks:

So, as I’ve done with previous trips, instead of doing full-on reviews, here’s a bit of an abridged version of what cigars smoked well, and where they were seeming to perform for me when on this trip last spring to Jamaica.  The smoking weather was comparatively perfect at a slight plus-or-minus variance of 28 degrees Celsius and 74% RH right at the mid-afternoon point daily almost.  And, as an added plus, the resort itself was a smoking-friendly resort (which I worry about a bit, when looking at resorts or hotels in “Americanized” locations in the Caribbean), and I smoked on our room’s terrace relaxingly, as well as quite a number of cigars being smoked poolside, with ashtrays supplied by staff, and no funny looks or questions about the “stinky cigar smoke” from either staff or other resort guests.  Frankly, when I did puff away, most were intrigued, and not a single nasty look or comment was noted (nicely enough).

1.  Quai d’Orsay Imperiales.  Oct 2012 “MUR” coded.  Enjoyed this with a Bacardi 8 & Coke, then with some Red Stripe beers.  Smoked well.  Lots of light cedar wood, cream, loads of vanilla bean, almost a hint of sweet almond nuttiness, and a heaping of refreshing citrus zest.  Delicious, with a wonky curve too.  Solid 94.  What a start! 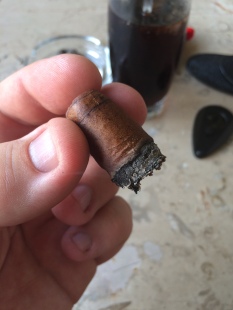 2.  La Gloria Cubana Medaille d’Or No. 2.  Ago 2008 “TEB”.  Light black tea base tones.  Light herbal / floral essences waving in and out.  Rosemary with roses.  Then, carnations and dill almost (wasn’t sure if I was hallucinating in the heat or not, LOL).  Very fragrant combos.  Waves of dried cut grass in there.  EXACTLY what I love about nicely aged LGC sticks – like a spring breeze a day after the lawn was cut, and the yard work was satisfyingly done.

Excellent draw.  The ash held on in one-inch groups, but was very lightly compresses and easy to flick off.  Razor-sharp burn, no need for relights aside from one cosmetic touch-up.  A solid 93-point smoke.  Not an overly “filling” cigar, per say, or potently flavourful in an overpowering style, but an extremely nuanced and mature-tasting smoke, with a subdued finesse…PERFECT to start that particular day off.

3.  Ramon Allones Superiores LCDH Release.  May 2012 “MUR”.  An awesome mid-day smoke.  This one seemed a bit more muted than previous I’ve had, but I have high hopes for this particular box code. 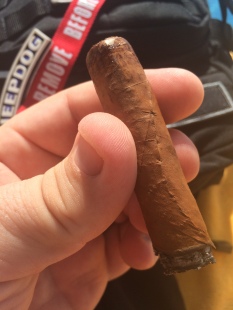 4.  QdO Corona.  Ago 2008 “TEB” coded.  Like most of these cigars, another one of Czar’s HQ / PSP offerings.  This one was slightly tight with a restrictive draw – due, in part I think, to me accidentally leaving it out of my travel humidor during the evening before, and sucking up a bit more humidity than I like to store my sticks at (62% RH).  That said, potent flavours of leather, orange zest, and rich demerara sugar.

Mild burn issues throughout (again, like the slightly tight draw, something that’s tied in with over-humidifying it), and needed multiple touch-ups and relights.  Could have been better and was a bit unfortunate.  An 86.

5.  Cohiba Siglo IV.  Oct 2013 “POU”.  Wow – what an ugly cap this thing had.  This was enjoyed wholeheartedly with several piña coladas with double-shots of Appleton 12-year dark rum…and I enjoyed every minute of it.  Unfortunately, this cigar was one with another slightly tight and restrictive draw, and thin whispy smoke therefore.

That said, it had STRONG flavours of smokey honey and lemongrass tea, damp hay, and some buttered toast.  Rich flavours, but a bit of a paradox in that there’s just slightly closed-in about them.

I was thinking this may also be because this cigar is just not quite ready yet (just over a year-and-a-half old; baby-aged for Cohiba almost).  Will be amazed to see what these are like at 3- and 5-years, and how they may develop then.

More to come on this…