…Or at least for a fat Canadian bastard!  LOL.

Following on from my first post on a bit of the Iberostar Grand Rose Hall resort itself, in Montego Bay, Jamaica, and then a bit about the pool grounds and beaches of the resort too, I started recalling some of the food there.

The food was spectacular.  And, looking through a lot of my pictures that I had on my iPhone as well as my digital SLR, I realized just HOW good it was, by the fact that…I barely took any pictures of the food!  LOL.

The lunches were always awesome.  I’ve been to soooooo many resorts where lunch is just…lunch.  This resort made lunch a big deal.  Each day, aside from eating at the buffet restaurant, or the beachfront a-la-carte sit-down restaurant, they organized a beachfront grill.  Giant BBQ’s, huge paella pans over hot coals, etc.  So, if you didn’t want to go to one of the regular restaurants, and just wanted some grub poolside or beachside in your bathing suit, you could walk the 50 feet from your lounger to get some spectacular and locally fresh food.

The seafood and beach grills were awesome.  The fruits and veggies were too.  But my wife and I were always amazed by the breakfast buffet as well.  Again, I’m just now realizing I took NO pictures of that….arrggghh!

But we knew it was going to be a hit when we arrived downstairs at the buffet restaurant for our first breakfast on the first morning after we arrived.  There was the usual fare – fresh fruit, the typical cold cuts and cheeses, some ready-made baked goods and pastries, and even the somewhat typical omelette station.  But then…my wife got excited – there was a fresh-waffles and crepes station.  And an ice cream sundae area (yes, for breakfast).  And even a sushi station.  And all of these areas were staffed by at least one chef / staff member, assisting you every step of the way.  And then…I got REALLY excited.

A steak station.  For breakfast.  With a chef asking for my choice of steak.  For breakfast.  “Sir – filet mignon, New York Strip, or ribeye?”  What’s the smaller size of ribeye you have there, as my plate’s already pretty full with this omelette?  (It WAS only 8:30 am, after all, LOL.)  “We have 20- to 32-once ribeyes.  Take your pick.  All our beef is flown-in certified Argentinian beef and steaks as well, sir.”  Well, fuck me sideways.  That’s just AWESOME.  For BREAKFAST.

And then last but not least, though my wife couldn’t care for it, I saw the crème-de-la-crème right beside the sushi area – an oyster station.  With loads and loads and loads of oysters, mussels, etc….with FROZEN BOTTLES OF GREY GOOSE VODKA right in the ice beside them, and stacks of shot glasses, little oyster plates and knives, and bowls of various topping sauces, such as my favourite sweet-Thai-chili sauce.

It was the best damn breakfast I had in ages.  Very unexpected.  An awesome omelette, a friggin’ huge ribeye steak, and oysters and vodka shots.

That said, not to be outdone were the supper a-la-carte restaurants too.  Most were reservation only, and people definitely had their preferences.  The teppanyaki dinner at the “Kiniro” restaurant was the most in demand, and once we got in there (dining with a few other couples we had met and were partying with for the week), we definitely saw why… 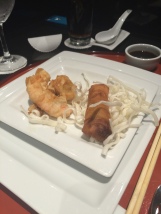 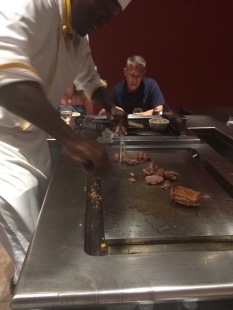 It was an experience and a half (Erin and I have never bothered to do a teppanyaki restaurant before, though we both LOVE sushi and sashimi and other Asian-inspired foods).  Kept us all more than entertained from a 6:30 pm start time, straight through to 9:00 pm drinks.  Our server had his schtick down to a science damn-near…

We’re definitely wanting to go back.