So back in February of last year, I wrote about my visit to see Ramon Iglesias Centeno, who runs San Ramon Producciones down in Havana, Cuba, back during the November 2014 Encuentros Partagas.  Ramon had helped me do a run of special jars for some fellow international cohorts and degenerates in the previous year, and during my visit, he also released details to me and John Reiner of some images and concepts behind two new jars he was planning on coming out with – a line commemorating “La Patrona”, and another of the pre-revolution 1920’s-defunct brand “Baire”.  Please check out that initial post if you wish to read more on that initial stuff. 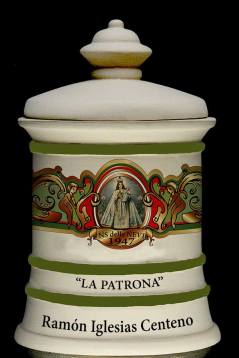 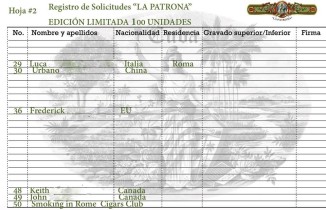 Back in late February / early March of this year, Ramon had posted to Facebook about making some miniature “La Patrona” perfume jars.  Don’t know why he did this prior to getting the main cigar jar line of them done, but it appears that’s now on the go.

Ramon has put some updates on his Facebook page, along with some pictures (forwarded to me by John Reiner – thanks John! – as I don’t have Facebook actually, LOL), which Ramon (with Jose Antonio Candia’s help) has allowed for me to share here.  Apparently, my jar is now going to be number 48 – yay, moving up in the world! – as he had a few cancellations.  With the kind assistance once again of Jose Antonio, he passed along some info and a translation for the writing on the Certificado card insert.

Ramon is apparently working on my and John’s jars already, so it’s good news and likely that they’ll be able to be given to us/me for this upcoming November’s Friends of Partagas Festival (that said, I’ll still keenly wait unexpectantly, until they’re actually in my hands, as sometimes things do definitely run on “Cuba time”, LOL).  These were initially stated to be released / available for the Encuentros Partagas in November 2015, so a year or so delayed is not too bad, considering.

Also, from the pictures shared, there’s a few things that appear different from the original details as I previously passed them along per Ramon’s statements at that time.  Instead of 120 units, it looks like only 100 now.  And, from those pictures, it appears that there’s generally nothing on the reverse of the jar itself.  Previously, Ramon had stated there would be a replication of a farmer’s almanac chart which was wrote by Don Alejandro Robaina from the year prior to his death.  Here’s keeping fingers crossed, hoping that that item is still going to be on there, and it’s just simply not in that graphical picture due to simplicity reasons.

Now, last but definitely not least, the details from Jose state that the writing on the Certificado card is apparently “a prayer tobacco growers use to invoke good health and nice weather for their crops.  The patron saint of tobacco growers is called Our Lady of the Snows, literally Nuestra Señora de Las Nieves.”

The prayer is translated as follows:

“Grant us, O Lord, by the glorious mediation of the forever loved Virgin Mary under the evoking of Las Nieves, the joy of health for our souls and bodies, and help us to be free from all hurricanes, pests and droughts and especially storms and lightning, against which she has always bestowed singular protection.  By the infinite power and merits vested in you by our Divine son Jesus Christ, who eternally lives and reigns beside you and the Holy Spirit for the centuries of the centuries…AMEN.”

Kind of interesting for a society that is fairly heavily non-secular and generally non-aligned religiously.  Beautiful nonetheless.