Yup.  Cigars were smoked, ashtrays were filled, villages were pillaged and plundered.  As per the norm, some cigars were good, bad, or great.  Here’s some brief rundowns, particulars, and photos where available…

1.  SCDLH La Fuerza.  Feb 2009 “OPM” coded.  A stick I brought from home, my first of this particular trip.  After only getting checked into the Habana Libre at 12:30 am, and with the girls being zonked from the travel that afternoon, John and I went to smoke on the back terrace at the Hotel Nacional at 1:30 am our first night there, with mojitos and Cubano sandwiches.  So simple, and nothing special, yet such a decadent start in the overall experience. 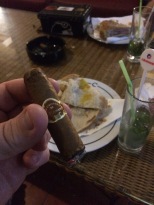 2.  LGC MdO No. 2.  Unknown code, a 2012 stick gifted from Tom back home.  With cappuccinos for “breakfast” at the Nacional – another great Havana treat to experience.  You just can’t beat the satisfaction of smoking a “La Gloria Cubana” while in Havana, Cuba! 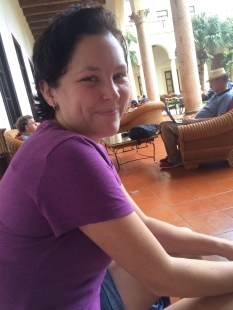 3.  RA Club Allones EL 2015.  My box code – Aug 2015 “RAE” coded; John’s box – Jul 2015 “OPG” coded, all priced at $8.30 CUC per stick (at Habana Libre LCDH).  John and I found a number of boxes at the LCDH at the Habana Libre, and decided to sample from two stellar looking boxes from two various codes (there were 3 different codes, spanning a 3 month production window, with 8 or 10 boxes there).  Which was a GREAT idea – the RAE code from Aug 2015 were ABSOLUTELY stellar, and a 92-93 smoke right from the start, buy, buy, BUY! – but then our plan went to shit a day later when we went back there to buy up the rest, and some Asian fellows were walking out with what was left.  We did, however, hit gold later on in the week when we found 6 more boxes at the Hotel Saratoga – all of which had the same Aug 2015 “RAE” code, and were as dark, oily, and aromatic as the first boxes.  Home run cigars, as much as they can be with the recent cost increases in these new releases.  Even the “lesser” sticks that we had over the course of the week were 89-90’s.  Buy, buy, buy! 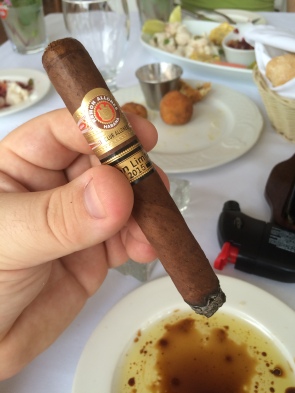 4.  Montecristo 80th Anniversario.  I was gifted one of these at the start of the week.  While I did enjoy it’s creamy, golden nougat and cafe creme flavours, mixed with some hay and leather, it also was a fair bit damp and had some harsh tones and needed LOTS of relights.  I didn’t stumble across a box during that week, but it’s something that did pique my attention.  Hard to say – need to try a couple more sticks, and seemed to get good thoughts from most down there.  Night and day from the Montecristo Anejado sticks.

5.  Cohiba Piramides Extra.  I was given a few of these, unbanded, from during the Habana Libre LCDH’s welcoming cocktail night.  Though unbanded, they were told to me by a couple of people that they were “actual current production” CPE’s, and not just customs rolled in that style / impersonation.  Well – they smoked like relative crap.  Completely “ugh” cigar – tons of relight attempts, no flavour, pitched two different ones barely a third into each.  So, to me, they had nothing special in them, did NOT smoke like a Cohiba at all, and definitely just seemed like a custom roller’s impression of them, while not using any proper Cohiba-intended tobacco.  That said, I have no way to 100% know.  I’m 90% sure they were unbanded custom imitations, but if they were actual current CPE sticks (even “seconds” that they didn’t waste the bands on), then I would steer clear, folks.

Then again – it was the Habana Libre LCDH.  Slight of hand wouldn’t be surprising!  LOL.

Be it Jorgito’s Monsdales or robusto largos (@ Club Habana LCDH), Yolanda’s piramides (@ Melia Habana LCDH), Reynaldo’s various goodies (@ Conde de Villanueva), or the plethora of other custom rollers that are still around at the various LCDH shops (Alex @ Commodoro, Juanita @ Melia Cohiba, etc.), or other random custom Salamones or unbanded Seleccion Privadas, THESE are the experience to enjoy, cigar-wise, when in Havana.  Fresh off the rollers’ tables, I can never have enough of them while down there.  They just hit the spot.

The irony – went through the better part of about a half bundle each of Monsdales and robusto largos, as well as a bunch of random other customs singles.  And how many pictures did I take of those?  LOL – none.  Just the one picture, from before “the slaughter”, LOL.  Shows how great the company, the food, drinks, and times were, that I didn’t take any “action” shots while smoking these customs, huh? 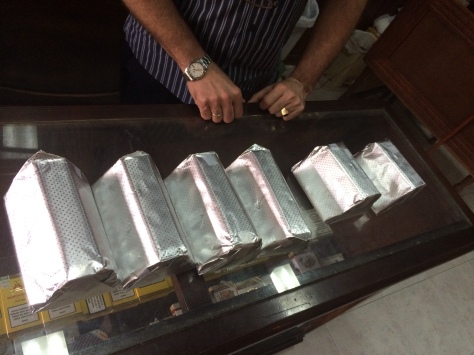