So, continuing on from my previous on this ascending rum tasting, here’s the next five rums or so.  Supper was had prior to these rums – pork chops, green beans, and rice, enjoyed with the Mrs and the Rugrats.  Again, these are sampled straight up, about an ounce of each, with no mixers, ice cubes, or chilling, and enjoyed at room temperature. 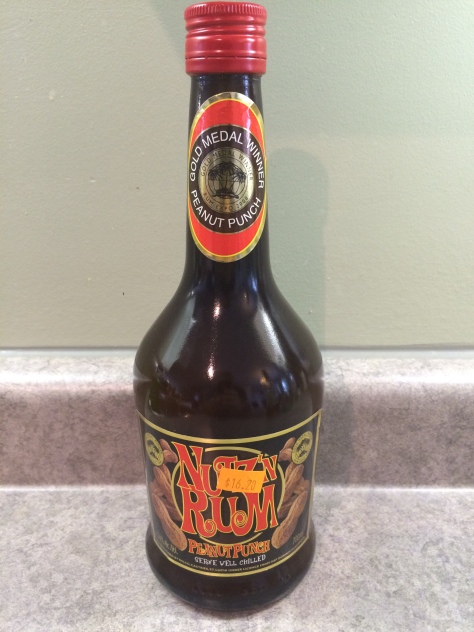 4.  Nutz ‘N Rum Peanut Punch.  (14% alc/vol, St. Lucia)  This stuff is actually in a nine-year-old bottle from when my wife and I had our honeymoon in St. Lucia and we did a rum factory tour there, and I just recently found again during a liquor cabinet clean-out.  Essentially, this stuff is one-third creamy peanut butter, and two-thirds amber/gold rum (three-year-old approximately).  Sounds horrendous, but it’s wunder-bar!!!  As the label says, it’s best when chilled.  As for tasting notes – it tastes like nuts.  With rum.  LOL.

5.  Captain Morgan Tattoo.  (35% alc/vol, Puerto Rico)  As I mentioned before, most Captain Morgan rum I find to be sacrilegious to the good name of rum.  However, along with the overproof spiced rum of their I like for eggnog drinks, I also like this stuff.  I first found this in fall 2007, when my wife and I were on a golf and shopping vacation to Myrtle Beach.  Found this at a liquor store there, and was told at the time it was a special offering for around the eastern seaboard / Gulf-shores states, but in the past few years it’s been right up to Michigan and Ohio now too (haven’t seen it in Canada yet).  Apparently, it’s made with a two- to three-year-old rum, depending on who you ask.

This stuff is very heavily infused with flavourings and such, and is a distinctly darker colour.  In the glass, though it’s a darker rum, it’s very watery in appearance, and with no legs on the glass at all.  On the nose, black cherry notes and faint allspice, some sweet nutmeg and cloves – almost even an aroma of flat Pepsi.  Tasting it, it’s heavy with molasses, cloves, and black cherry, and the heat ramps up on the aftertaste.  Also, with all the myriad of spices they add into this rum, it almost reminds me a bit of that Jagermeister feeling in the back of your throat afterwards, almost like a tinge of NyQuil is mixed in there too.  LOL.  Even though that flavour is around the edges, this is one that can be sipped, but I’ve enjoyed it most on a 50/50 splitting with some classic Coke.

6.  Ron  Santiago de Cuba Anejo.  (38% alc/vol, Cuba)  Now we’re starting to get into what I like for going either as sippers or mixers.  This one is a bit harsh for the former, but mixed 50/50 with Coke, it’s pretty nice.  Cuban rum I find is a bit harsher compared to others (ie – a Cuban 7-year-old is sometimes not as good as a 5-year from somewhere else), but Cuban rums just seem to pair so well with Habanos cigars (whether it’s a mindset thing or not, I dunno).  This stuff (Anejo) is the five-year variant.

A faint bit of legs in the glass, I’m always amazed at how this one shrugs off any residual water to the inside of the glass – kinda like oil and water.  On the nose, there’s a light caramel nuttiness, but very strong hits of banana actually, and a smokey woodiness.  Tastes of ripened fruit, some candy sweetness, and a bit of citrus (orange peel?) and slight bitterness/sourness, are followed up with a bit of heat and a slightly harsh bite on the sides of the tongue.  The flavours overall aren’t abundant or apparent in a good mix to have me enjoying this rum as a sipper only – as mentioned before, it’s best as a mixer, as I personally think it meshes well with caramel-heavy Coke. 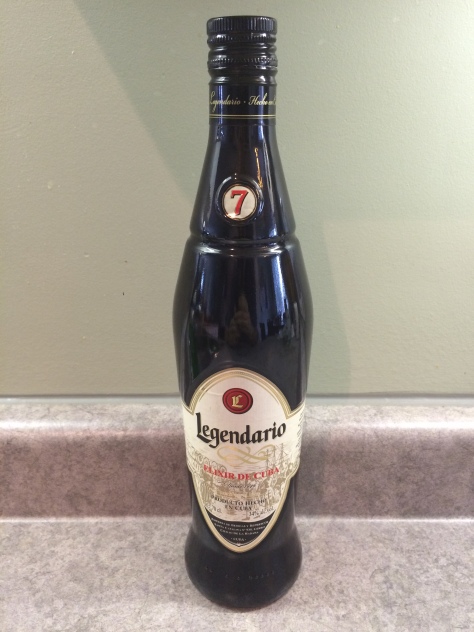 7.  Legendario Elixir de Cuba.  (34% alc/vol, Cuba)  This stuff is always a treat.  It’s a liqueur that’s made from seven-year-old Cuban rum.  Yup, that’s right…it’s booze that’s made from other booze.  LOL.  This stuff is an amazingly sweet and delicious concoction, it’s best as a sipping dessert aperitif after a nice long Cuban seafood dinner, and enjoyed with a post-dinner cigar.  Glorious.  And that, coupled with small production batches, are usually why it’s so damn hard to find on trips down to the island usually.

In the glass, this stuff has really nice legs actually, and has a bit of sediment in it usually (usually attributed to the pulverized raisins used to make this concoction).  While noticeably darker in colour for a seven-year-old, it sticks to the sides of the glass and coats it well.  Aromas are of lemon, light leather, and a vanilla-honey sweetness, and even with a decent raisin and even banana air to it.  In the mouth, flavours of dark smoky honeyed caramel hit you front in the face.  This shit is swweeeeeettt.  The heat of the alcohol is around the edges somewhat, but really covered by the smoky honey and sweet raisin layered flavours.  There’s a bit of an herbal background to it too, accenting the honey and lemon.  Reminds me of a white port, but with a heavier smokiness to it, and a more tropical palate accentuating it.

8.  Havana Club Anejo 7 Anos.  (40% alc/vol, Cuba)  This is my everyday rum-and-Coke rum.  While some seven-year-rums may be good enough for everyday sipping, I generally don’t think most Cuban rums fit the bill, and especially not the younger Havana Club stuff.  That said, it pairs too damn well with a Cuban cigar when in a 50/50 mix with Coke.  It’s fair to say I go through a healthy amount of this rum compared to all others in my cupboard.

This particular bottle is a Pernod Ricard produced bottle, purchased in Canada, and not direct in Cuba (though for this hemisphere, it is produced there).  Also notable is that the Havana Club product line used to be the Bacardi’s, before the Cuban Revolution and such, and recently Bacardi has apparently introduced a “Havana Club” product into the U.S.  But this stuff here is the Cuban production stuff sold worldwide by Pernod.

Lighter in colour than what I like to see, legs in the glass are faint.  Light aromas on the nose of caramel, buttered toffee, and a coffee mocha element, but they’re overpowered by the harsh alcohol ethers.  Harsh on the palate, flavours of nectarines and cedar with a butter and caramel edge are washed away by acidic and harsh alcohol layers.  It’s good, but not for sipping really.  Just soooo much better as a general-use dark rum for rum-and-Cokes and even stellar pina coladas.