I had a nice little experience smoking this cigar, even if the cigar itself wasn’t my favourite of recent times.  A co-worker of mine, she being also into cigars mildly on-and-off for years, had found a fairly local cigar retailer near our workplace, on a local native band’s reservation.  I’ve known of this retailer for some years now (being a company that many online international cigar enthusiasts purchase from), but did not realize it had a very decent private lounge with some extraordinary comfy leather seating.

So, one particular “long change” off (where we have a 24-hr period off of work, as we switch from days to our night shift), her, I, and another co-worker who occasionally enjoys cigars, we all went to this retailer to enjoy a couple of hours, tucked away enjoying our hobby away from the end-winter temperatures (though it was a decent enough and sunny day).  It was nice, as I was able to do some fairly decent window-shopping, and purchased a bunch more non-Cuban sticks to bring down as unique treats to Cuban friends during my Feb-Mar Havana trip (it’s something I like to do, as they’re generally unable to get stuff from off their own island like that).

Anywho, when we were perusing their walk-in for Cuban cigars, I came across these San Cristobal De La Habana sticks from their LCDH Release series.  SCDLH is a very recent brand in the Habanos S.A. portfolio, only being born in 1999, and made to commemorate Christopher Columbus, and using the original name for Havana itself.  All of the brand’s main cigars are named after the old forts that guard the harbour entrance into Havana – El Morro, La Fuerza, La Punta, and El Principe.  The La Casa Del Habano Release series, made somewhat exclusively for the chain of international stores selling Habanos cigars, was sort of brought about in 2004 to commemorate the 5th anniversary of the brand, when the El Morro was included into a commemorative special humidor release along with 3 new sticks -Oficios, Mercaderes, and Muralla.  These new three were re-released in 2006 until 2011 as a special LCDH Release series, in a special box and with a secondary LCDH band, with some of the original-release boxes of these coming out in late 2005, as this box of Oficios was.

These piqued my interest when I came across them due to the box date and relative nice condition of the cigars, lovely dark wrappers, and just as a nice change of pace for me (I really like the La Fuerza, and also keep a good stock now of La Punta, but these special one’s [LCDH sticks] haven’t just been on my hit list).

Construction/Appearance & Pre-Light:  This was a nice looking box.  The presentation on these in the darkly varnished “boite nature” boxes are a nice change from SCDLH’s generally blah looking light-yellow-and-white semi-dress boxes.  The box varnish is a pretty close match to the secondary LCDH bands on these sticks.

This cigar was pretty nice looking.  Fairly dark and marbled wrapper, light oils on the wrapper leaf, and with just a slight imperfection to the finishing of the triple-wrapped cap.  The construction and weight in hand was fairly nice, with the cigar being somewhat solid but without any overly hard spots.

After a cut and taste at cold, just one main hit – molasses, and loads of it.  Fingers crossed

Opening Impressions:  Definite tones of rich, aged tobacco.  Loads of smoke when puffed on, but only slight wisps on its own.  A bit more restrictive on the draw than I’d like once lit.

First Third:  Into the first third, the molasses sways ever so lightly in and out, mostly leaving just a rich tobacco tone.  Maybe a bit of hay and wet leather around the fringes.

I was having this with an XO brandy – can’t remember for the life of me what the brand of it was.  I’m not a huge brandy drinker, though I do like the occasional touch, especially around the Christmas holidays.  I grew up with a Dutch mother (and my wife loves that, as I “came trained” as she likes to say), and a typical goodie that we always had floating around the house over Christmastime was “brandy beans”.  Great little candies – a dark chocolate, banana-shaped “bean”, filled with a half teaspoon or so of brandy liquor inside.  So, as a pre-teen kid, I remember scamming the whole box on multiple occasions, and REALLY enjoying my Christmas holidays!

Second Third:  Into the second third, not much more really.  The molasses tones really waved back into the latter recesses of the aftertaste.  The rich tobacco tone was there, but it was ever so faint.

This was turning into a bit of a hot-air generating blah.

Final Third:  Into the final third, a little bit of redemption.  The hay and dark leather came back a bit, and a wet woody tone came into play, almost sweet but a bit mangy at the same time.

I noticed at about the mid-way point on the cigar, and it became really prominent in the last third, that my tongue was starting to get a tingle.  This cigar was becoming very tongue tingling, almost like a nicotine sting on the tongue, but without a heavy nicotine hit though.  Almost like that residual feeling on your tongue from some Novocaine at the dentist’s office.  Kinda weird.

Maybe some tinges of an anise flavour in there too?  Was that part of the tingling I was getting?  Hmmmm. 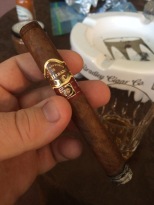 Finishing Comments / Overall Impression:  This cigar wasn’t overly complex.  I was hoping for something special, considering I do like the heavy molasses and leather I get from other SCDLH sticks.  This wasn’t overly complex, but also kind of showed some faint dark brown sugar tones right near the end.  The leather was there a bit, but it became over-ridden by a carbon / pencil lead finish in the last third too.

Nothing special.  Are these past their prime?  Was it the brandy overpowering the stick?  Was it another example of a cigar that didn’t draw too much attention for its flavours upon release, and now aged, has simply become an aged cigar with not much to offer?  I’m not sure – perhaps its a combination of all the above – as I didn’t delve into these on original release.

I’m sure there might be fans of these.  While a nice change, and the looks and such checked all the right boxes, the flavours just weren’t there for me.  Not a throwaway, though, so I may have to give another stick a try again in the future.

At the very least, good time spent in a nice spot with great co-workers.

Smoking Conditions:  In an indoors lounge at a very comfy 20-something, and very well ventilated, but 6 degrees Celsius and 59% RH outside.