Yup – another delayed review.  Deal with it peoples!  😉

And getting into some of these delayed reviews, we have this specimen, an H. Upmann Monarcas / Monarch tubos.  The actual name of this stick is a Monarcas, however, the old-style aluminum tubos have Monarch on them – surprise, surprise, Cuba isn’t 100% clear on what something is.  Hell, I myself am not 100% on what the box code was on this particular stick, but I’m guessing 2006-early 2007.  These came from a mixed sampler purchase from December 2007, and at the time, I noted that these were from a pre-’07 (must have been something that the retailer stated to me at the time of purchase).  The band as found on these was only started on various H. Upmann sticks in 2006, and these cigars were eventually discontinued in 2009.

Price per cigar:  Approx. $20.00 CAD per stick (part of a tubos sampler from online retailer)

Construction/Appearance & Pre-Light:  This cigar was pretty darn nice.  Colorado rosado wrapper, fairly smooth and silky-thin wrapper leaf.  The foot itself looked somewhat loosely packed, however there were no soft spots to the cigar, and it felt fairly hefty and well-packed in hand.

What’s also nice is that this came in the older, plain-aluminum tubes.  Sooooo much nicer than the newer weird and ugly dark-green painted ones for H. Upmann.  These older matte-finished plain-aluminum ones have a nice tone of dark green paint for labelling, and the added touch of the embossed H. Upmann logo on the threaded end-cap make it just a nice presentation all-round. 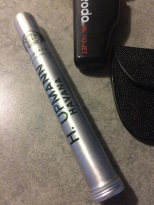 After a cut and having a taste at cold, very nice.  Some honey, extremely light cinnamon, and fresh cream at cold.  Interesting.

Opening Impressions:  Not bad.  A razor-sharp burn to get it going, and decent amounts of smoke once going.  Some nice creamy and shortbread tones in there.

First Third:  Into the first third, I picked up on some flavours of Sir Winnie, but it was a bit introverted through this first third.  Definitely loads of rich tobacco in this Churchill.  I’m generally only partaking in some other H. Upmann vitolas (Sir Winnies, Magnum 46, Mag 50 sometimes, and the occasional No. 2), so this one has been near and far to me.  Definitely more toasty tobacco and woodiness through it.  The creamy and shortbread tones began pulling back some.

Second Third:  Into the second third, this is where it opened up for me.  Toasted tobacco tones.  Some light cedar essences in there, almost a different kind of cedar though – almost like the aroma you get in a dried-out cedar-lined dry sauna.

Started to get a slight bit more edge and more “heat” to the flavours. Perhaps a pink or white pepper edge added to it; almost like a red-pepper-jelly fading in and out of the honey and shortbread sweetness.

Final Third:  Into the final third, the body built up more, getting into the medium-full range, and I started really getting that mongrel version of Sir Winnie.  Dirty, dank, wet shortbread cookies, hints of bread and some toasted nuts.  Lost the honey and cream aspects completely.  If not for knowing how aged it was, part of me would have guessed it was a younger cigar, for some of the mangy youthful aspects kicked in.

Finishing Comments / Overall Impression:  This cigar was so-so for me.  The burn was impeccable – razor-sharp, and not needing any relights, even considering the humid and breezy smoking conditions.  I really started getting more and more of a peppery version of a Sir Winnie – though part of me longed for a more creamy and refined Sir Winnie, looking at the same band.

This is a slightly stronger, less refined, more “mangy” version of a Sir Winnie, in my opinion.  So, with so few cigars left in the H. Upmann profile, was it wise to have this cut from the portfolio?  Definitely, its always a shame to see any cigar get the axe, as every single cigar has it’s fans.  That said, I don’t overly disparage the thinking behind it, as two Churchills in the same brand, with fairly limited selections, wasn’t likely of the greatest business sense.  I mean – how hard would it be to play second fiddle to the Sir Winnie too?!?!?!?

It was a nice experience overall, and generally pleasant smoke.  I won’t be searching out any further samples in the future likely, but I did enjoy the well-aged toasted-tobacco aspects of this stick, and the overall construction, burn, appearance and packaging all saved the score on this stick despite my palate not overly agreeing with the experience.

Smoking Conditions:  In the hot tub, but a fairly chilly and breezy night, -10 degrees Celsius and dropping rapidly, 72% RH