Yesterday, I had one of the most humbling and awakening experiences thus far in my career.  Sgt Andrew Doiron was repatriated back to Canada from Iraq, coming in via my base at 8 Wing / CFB Trenton.  I’m here, in the comfy confines of a frozen but comfortable country, while other brothers-in-arms are off in harm’s way.  His sacrifice, like the sacrifice of others before him, is always remembered by those in the armed forces community.

So, I and many others volunteered to assist on our days off, as even though we’re at minimum manning in the Military Police, it was one event that we all insisted to the chain-of-command that we wanted to be there for.  I wasn’t quite ready for it though. 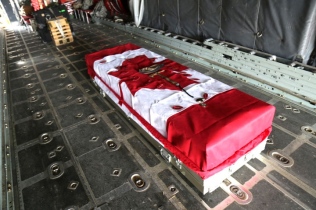 Myself and our Lt were tasked with providing a presence, in standard MP patrol-dress uniform, at the A-lounge of the PAX terminal at CFB Trenton.  There, we would witness the heartbreaking agony of a family with their son/brother/former-spouse/rock taken from them.  Many dignitaries arrived to try and console their loss with the knowledge that he died fighting for our beliefs and freedoms – Gen. Tom Lawson (our Chief of Defense Staff), the Governor-General, the Minister of National Defense, and multitudes of other brass and VIP’s would try to encourage the family.  All the while…Sgt Doiron’s various nieces and nephews played and wondered what all the fuss was about, too young to quite comprehend the loss and the extreme solemness on display by the 60 or so family and dignitaries huddled into the small, secluded, private area of the terminal.

Marching out after the family onto the tarmac to receive his casket and then salute it’s procession, I had it easy.  Our wing chief, CWO Elder, a giant 6-foot-4 or so of a man (and an MP as well, prior to becoming our wing chief), stiffled hardly to retain his composure as Drew’s remains were loaded into the hearse.  Hundreds of soldiers, many of them Canadian Special Operations Regiment personnel in their noticable tan berets, stood in salute to him, frozen at attention aside from rapidly blinking eyes holding back tears.  Other MP co-workers of mine took part as escort vehicles for the ride to the coroner’s office in Toronto.  Public support, as always during these events, was present at every major roadway and highway overpass.

Some of the most humbling aspects of what we do, and who we are, as Canadians, was on prominent display yesterday.  Makes me so very very proud.