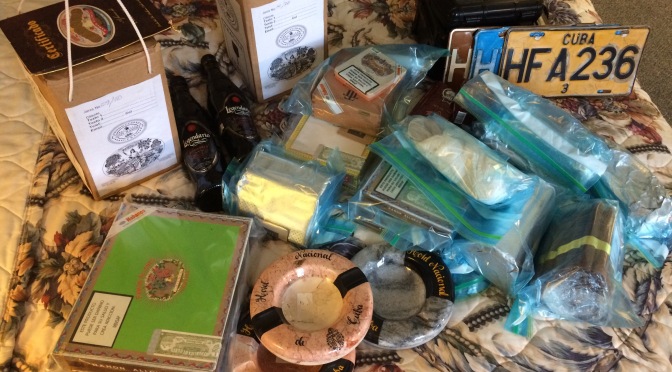 So, my voyage La Havana has come to a close again.  Got back yesterday, relatively trouble free.  This trip was overall quite wonderful – no stomach issues, the ability to put more faces to names, and many more good times shared with other BOTL’s/SOTL’s from around the globe.  As always, some interesting news tidbits and a very few nice finds (though the latter is definitely getting to be less and less prevalent).

More posts will come in the following days detailing some of the below, but here are some of my highlights…

So, more will be forthcoming later on over the next week or so about some of the above.

Obviously also, there’s the news of Hamlet’s departure / defection to the U.S., with him now in Naples, Florida, working for Rocky Patel.  Needless to say, many there in Havana were shocked and saddened by the occurrence of this, but many also understanding and wishing nothing but the best for him and his family.  We all only found out about it on the Thursday night / Friday during the tail-end of the festival itself (with it being the talk of the town prior to the gala dinner), after his resignation letter was brought in to the Partagas shop by a third party after his departure.  Something that had been in the works for quite a time apparently, and some of his best friends and childhood amigos there in Havana not even aware of it prior to (understood, but heartbreakingly so).

My own thoughts are very conflicted on it, but I can only hope for great things in the future for him.

And, by the above attached photos, I did find enough to fill my luggage again, LOL.  Going through Customs on this end was fine, with no additional taxes levied surprisingly.  A selection of some of the goods found during this trip:

My liver is aching, my lungs are tired, and my throat is sore.  Gonna be on a greens and fruit diet for the next little bit (my new joke – the only thing that makes Caesar salad shitty is those green leafy things they include with all the cheese, bacon and chicken sometimes, LOL).

But, it was another wonderful visit to the island and crazy little city.  Definitely better for me relaxing and getting “into the vibe” compared to November, when I was “herding cats with a ladder” as some like to say.

Glad to be back home (need family time again), even though the weather’s crap here still (going from plus 30 C to -20 C always sucks).  Miss the island a bit already, and will definitely be looking forward to the next trip again!

5 thoughts on “Back again from Havana, missing it already…”