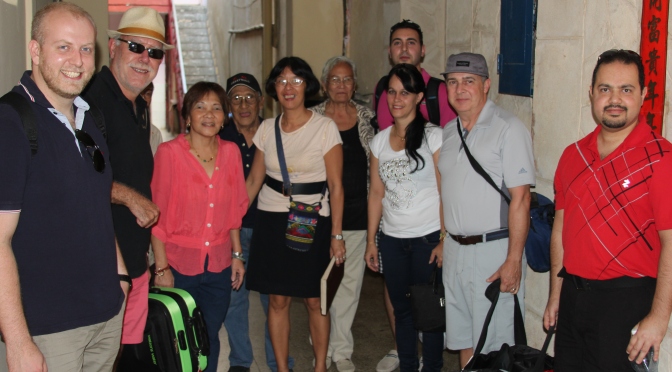 Ah, the joys of being in Havana, and bringing some good cheer to others.  That was basically the first order of business for us as part of this year’s trip for the Encuentro de Amigos de Partagas.

A little over a year ago, good friend Nino Munoz brought some info to light to many of us about this Cantonese society in Havana.  It started with a gentleman by the name of Mr. Pok Chi Lau happening upon meeting a lady by the name of Caridad, and her relating to him the story of her adoptive father, a Cantonese opera performer, and her adoption as a little girl in the Barrio Chino in Havana oh so many decades ago.  What evolved was a lovely documentary that Mr. Lau put together, illustrating the frustrating confliction of a zest-for-life and also the desparation that’s faced by many of the Chinese diaspora in Cuba.  The write-up and documentary videos, found here on Nino’s blog, are heartwarming and enlightening.

This was followed by many of us in the Canadian cigar community from FOH, and more specifically by many in the Toronto area directly, wanting to participate in some way.  Many of our members and friends are Asian, some have Asian spouses, and the Chinese community in the Greater Toronto Area, at just under 500,000 people, is the largest outside of China and Hong Kong themselves (take THAT San Francisco and Vancouver!!!)

In November of last year then, during last year’s Partagas Encuentro, a number of the Canadian travellers were able to meet the society members there, and bring some gifted donations.  Unfortunately, I missed that trip, but I heard from all the others about the continuing need.

So, in February/March earlier this year, a few of our Toronto area cigar-smoking-circle friends wanted to participate further, Edward and David.  They were able to meet up with Nino, and go to see Graciela Lau, the President of the Lung Kong Society there in Havana, and bring some more gifted items and cheer.

Onwards and upwards it would continue.

This past spring, when co-ordinating the planning for this past summer’s 2014 Toronto MegaHerf IV, it was agreed to by Art, Tom, Frank and myself that we would split the proceeds going towards charities, and include the Lung Kong Society in Havana to a 50% share (with the other 50% going to FOH friend Rob Schildt’s Nicaraguan Children’s Feeding Mission, a charity that we have provided for since the inception of the Toronto MegaHerf charity event).

So, as this August’s MegaHerf IV raised many thousands of dollars, we had some good will to bring last week to the ladies and gents of the Lung Kong.  Many suitcases were stuffed to the brim.  A generous benefactor from Hong Kong (thank you again, kind sir), who has donated in the past and has an emotional connection to the people we’re helping, even assisted us in providing some traditional Chinese items and assisting in shipping arrangements to Nino so that we could hand these items over in Havana.  Tom and Ed here in Toronto co-ordinated a gargantuan task of sourcing out needed and wanted items – a vast conglomerate of stuff from within the Chinese shops and communities in Toronto, kitchenwares, foodstuffs and seasonings, medical items, etc. – and they then led the co-ordination with other trip participants to ensure everything was transported safely and effectively.  Enough can’t be said of these two, and the pathway that they have led for the rest of us in this venture, as their heart’s are tied to the cause incredibly so.

And so, Nino (with his travel-mate-cum-partner-in-crime Yannick) assisted us in being welcomed by Graciela and the ladies and gents of the Lung Kong Society on the Sunday afternoon, after arriving in Cuba the day before.  We were treated as slightly-embarassed guests, welcomed at a head table, honoured to be allowed a little window into their daily lives, and able to bring some much needed items. 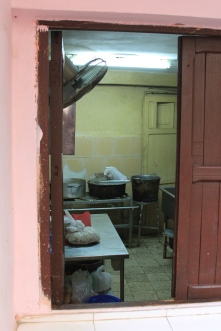 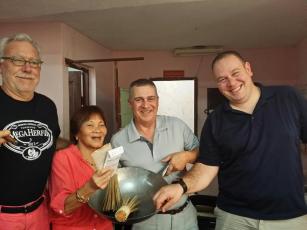 They are continuing renovations on their society’s building, in the hopes of opening up a small restaurant to become a somewhat self-sufficient revenue source for the society.  We were invited to their shrine, and requested to light incense sticks in honour of both the gods above and of elders gone before (both theirs and ours – miss you Dad). 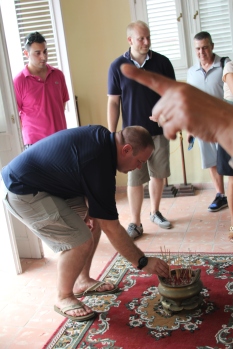 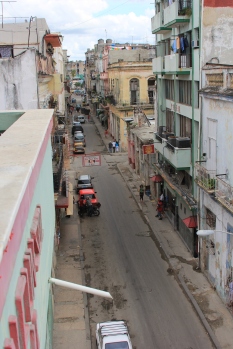 It was an enlightening visit.  A stark reminder of the frustrating contrasts that exist in Cuba – of the happiness that Cubans (of all ethnic groups, ages, and persuasions) can have no matter how much or little they may have, and then, on the flip side of the coin, simply how little they do have to even be happy about.  I was exposed to these ironies many years ago while working as a missionary in the Dominican Republic while in high school, but these little reminders help to keep one grounded in today’s evolving world.

I’m happy to be a part of this small bit of cheer that we could bring to the Lung Kong.  I was able to witness the pleasure that our visit brought to them, and how much it seemed to energize them.  Prouder still that I was allowed a peek into this interesting side of Havana that was first opened to us by Nino and Ed and Tom, etc.  And as Tom stated so eloquently, and Nino assisted us in translating, we feel happy to help as much as we can and did, but sad in that it’s only a small piece of what’s needed.

I will say this…those ladies and gents have a great sense of humour as well.  They refer to Nino as “Santa Claus” – it seems somewhat unfathomable to them that some white-haired crazy gringo from a northern land of snow, and outside of their social or ethnic circle, would be simply gifting them with resources and items from their traditional culture.  So, it surprised me when I, lucky or not, got given a nickname as well – hell, I was simply a passenger on this visit, more so to be there to document all the work that Tom and Nino have put in for this.  But somehow (potbelly aside, I have no idea why – well okay, maybe I don’t have much hair left either), Graciela and a few others took to calling me “Buddha”.  LOL.  She said it was because I was part of a great group of givers.

Well, as my wife would say, it wouldn’t likely be because I was “the enlightened one”!